Down the memory lane: Aca Trifunovic Being among top ten in Partizan history, in any given statistics, is a great honour for each player who called Humska Rd. his home. It`s a privilege, honour and proof that years of sacrifice, honest and hard work have paid off. Fans remember their greats and those who were not able to watch some of them live, have monographies, almanacs and number of brochures covering club`s history to look into.

These players are club legends, heroes of their time and role models for many of those who wore black-and-white shirt long after them. But, what about those players whose stats are just below the milestone? One goal, assist, appearance or trophy behind? Unfortunately, however extensive before-mentioned publications are, some names are excluded and therefore easy to forget about, like an athlete who was fourth-placed in a final race.

That`s so wrong, considering there are top-notch professionals around with authentic careers and life stories and, regarding Partizan, first team players who indebted the club more than basic statistics would show.

Namely, there`s no Aca Trifunovic on a list of top ten Partizan players regarding number of appearances for the club. Trifunovic was one game short of top ten, he failed to make at least a cameo from the bench to equal 478 appearances achieved by 10th placed Bobek. He stopped at 477 along with Bruno Belin.

Famous Partizan right centre-half of the late 70s and early 80s turns 66 today and we took him down the memory lane to learn more about his seven years spent at the club:

“I am proud of each game played for Partizan. This is the club I always supported and where I enjoyed the most through my professional career. I won three championship titles, Mitropa Cup and played in a top quality Yugoslavian league”, says Trifunovic.

“Back then, you had 34 round of league football, national cup, international competitive games and friendlies and i`m sure I could have played a few more but I don`t regret a thing. It was a great joy and I`m so thrilled with everything that happened to me during my Humska Rd. days”. 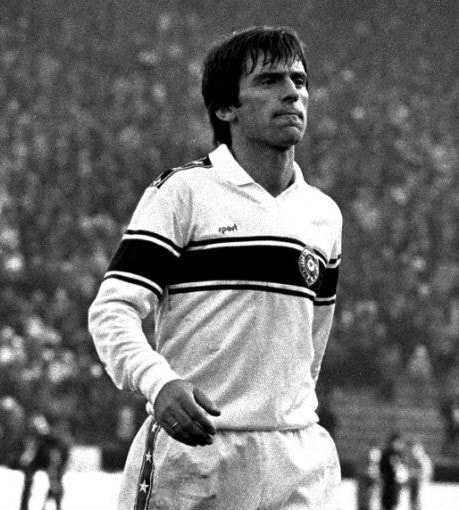 Trifunovic arrived to Partizan in 1976 and won a title with the club in his first season:

“Out of three, this first title is the one I`m most fond of. I arrived 8 rounds before the end of the season and won the championship medal out of the blue. Naturally, I`m fond of two other titles, especially the one won with Milos Milutinovic by the dugout, but the title won under coach Ante Mladinic is special as we played truly beautiful football game. Comparing my playing days and modern football, I have a feeling pressure was not so present back then. No one expected us to win the title each season, fans wanted us to play fine football game and fight for Partizan and the success came as result of everything involved”, says Trifunovic.

In November 1978, Partizan played 63rd edition of Eternal Belgrade derby and lost 3-1 in harsh winter conditions. This game will always be remembered by a keeper`s Petar Borota blunder, when he famously gifted the ball to Crvena Zvezda`s Milos Sestic to score. There are various theories involved regarding this incident but Trifunovic insists none of them are correct:

“I know people say Sestic tricked Borota into believing referee has blown his whistle for a foul, but that`s not true. I was there, next to both of them. Borota claimed the ball, referee was silent, but someone has blown the whistle from the South stand, I`m sure of it. Borota dropped the ball for a kick thinking it was a foul and Sestic seized the opportunity to score the opener. I saw Borota doing it and runned towards him, I tried to react, but I was not quick enough. I think I`ll never forgive myself not preventing it”.

After a foreign spell at Italian outfit Ascoli and a bit of a coaching career, Trifunovic celebrates his 66th birthday at Partizan Youth Academy:

“I enjoy what I do. Partizan Youth Academy is recognized all over Europe and I`m convinced it will be the same for years to come. We have lots of quality kids in all age groups and they will prove themselves as seniors soon”, says Trifunovic.