On this day: Sasa Ilic hanged his boots two years ago He won 11 championship titles, 7 cup trophies and set the club record for number of appearances (876). Ilic scored a total of 240 goals for Partizan and took part in two UEFA CL seasons with the club. Finally, he was the first player in club history to have his shirt number withdrawn, in honour of his achievements.

Number 22 shirt will not be worn again and Ilic was the last to put it on two years ago to this date.

It was a game against Proleter Novi Sada when Savo Milosevic charges won it 2-0 with goals from Danilo Pantic and Ricardo Gomes but Partizan fans will always remember it as “Sasa Ilic`s Farewell”. As humble as he is, Ilic never wanted this game to be in his honour – it took a bit of persuasion to make this game special. 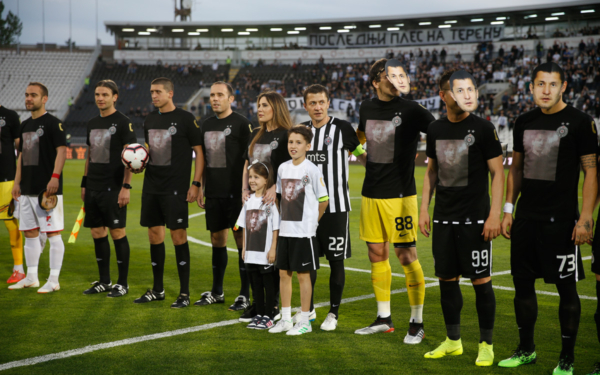 “I`m not someone who wants to be talked about and I couldn`t wait for it to be over and everyone to stop talking about it. Now, two years after, I can say it was organized in a fantastic manner and every time I talk about it emotions are huge and strong. Moreover, we had a hailstorm during the game but I`ll never forget when I did the lap of honour with my son Niksa” – says Sasa Ilic.

How can anyone forget that day? Tons of water and ice around Topcider Hill and constant chant of Partizan fans “I`d love to see him play some more, as Sasa is the one and only, I care about him, he means a lot to me”. 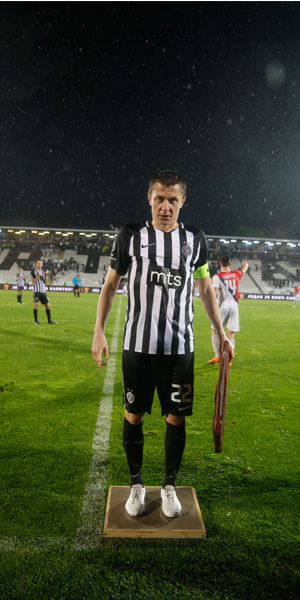 Sasa Ilic left the field on 82 leaving his bootprints as an all-time memory. That footprint has a special place at his Belgrade home.

“I was postponing my farewell for a long time but I was aware that day will come eventually. I had luck with injuries during my career, probably due to my genes. You know, Partizan is my modus Vivendi, I`ve grown up here, learned to win and lose, gained friends and best men`s and during my career I played with great number of players, I don`t believe there`s many of them who will say something bad about me. They can say I played good or bad but I really think most of them will talk positive things about me and that`s what I`m really proud of” – says Sasa Ilic.

“I miss the very company of my teammates the most. Our banter in my room, where we all used to gather, play cards and made plans to win trophies and go out..To be honest, after that farewell game and the cup final few days later, I thought we`ll keep doing it. Only month or two later I started realizing I`m not playing any more, that all the routines I had for years are gone. I found it hard but it had to happen though”.

It did happen two years ago to this day, a day that will always be remembered as “Sasa Ilic`s Farewell”. Two years on, it`s a rainy day in Belgrade just as that 19th of May 2019.