We spoke to holding midfielder Sasa Zdjelar after the game.

If we look back and compare Belgrade with Rotterdam leg, it seems Partizan was much better and firmer away to Feyenoord?

“I fully agree with you, we were much better today. We conceded cheap goals at home but this game served us as a good test ahead of domestic duties next Monday and I think we should not be ashamed of ourselves. We were more solid tonight and played a good game all the way through, battled well against one exceptional side but we didn`t deserve to concede a third goal at the end. But, it doesn`t matter, we move on and Monday is what matters to us”, said Zdjelar.

Feyenoord`s opener was a “cheap” goal and it has to be said home team`s starting line-up was quite strong, considering they play Ajax this weekend.

“We conceded two goals in dying seconds of the first and second half respectively. When you concede in a such manner it`s not hard on you, but their starting line-up shows their respect for us and we respect that. I`m sure they think about their respective championship as much as we do. Monday fixture means everything to us”. 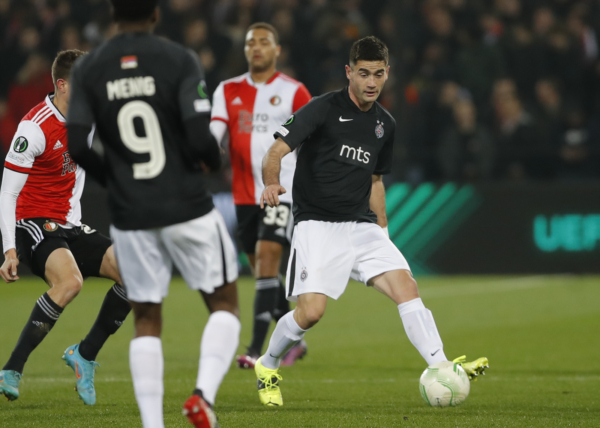 Do you think two-all draw should have been a fair result tonight?

“I`m sure such outcome would have satisfied our football public, fans and media, but we are out of the competition anyway and we need to focus on domestic matters. Nonetheless, I have to say Partizan team did a lot in Europe this season and nobody expected us to get so far and to play in front of 50, 000 crowd here, to enjoy in this football pitch. I`d like to congratulate to all my teammates, we really made a big step forward in Europe and we move on now, turning to Serbian championship all the way”.

Partizan squad is back to Belgrade around 5.30am after such a tiring game. On Sunday, you`ll make a journey to Surdulica for a Monday`s league encounter. How do you consolidate now?

“After such stadium and atmosphere tonight, we have to get back to our reality, our league, pitches and everything that is in front of us. It won`t be easy but we have four days to rest, although we will be back home from Holland early in the morning. When you play Europe, you have to get used to this and adapt to everything, playing twice a week all the time. Therefore, we have to get out onto the pitch on Monday as strong as possible”.

“Their level of football, organization, pitch surface and stadium is clear. With the help of the state, we should aim to pack our stadiums, to have such pitch surfaces and to have our fans enjoy the football game just as home fans did tonight. I`d also like to thank Partizan fans who were here in large numbers to support us”, said 26-year-old midfielder.